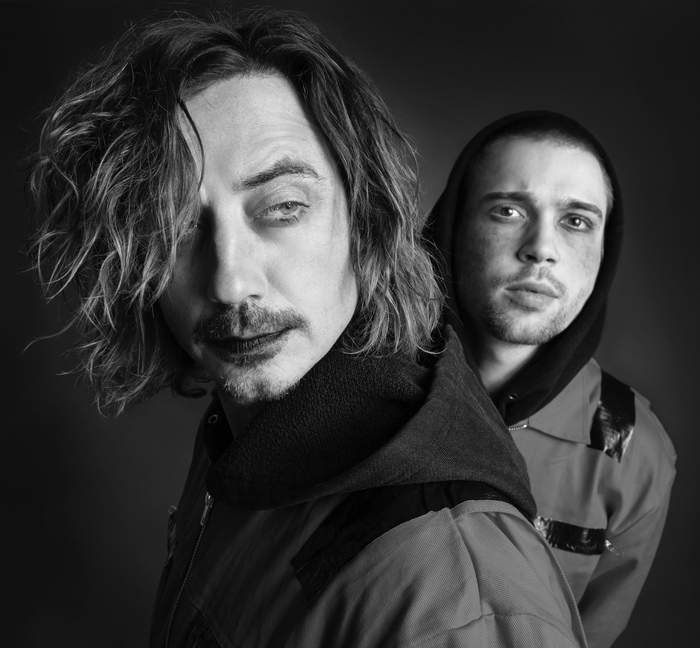 Back in 2017, as Nils Brunkhorst casually parked his bike outside Phil Sunday’s studio in Berlin, neither he nor Phil had a clue that this initial meeting would spark the creation of something that would not only bind the two forever, but would also push them far beyond their own individual boundaries. The meeting laid the foundation for SAINT CHAOS, providing Nils a platform for his distinctive voice, and giving Phil the opportunity to craft groundbreaking sound ideas.

The music they’ve created since that fateful day has always spoken with a voice that can only be described as uniquely their own. Coming from two heads, and notably, two hearts, the songwriting duo describe their sound positively as “ambivalent”, a trait also reflected in the band name: SAINT CHAOS is always dualistic – extrovert and introvert, vulnerable and confident, mild and wild, playfully balancing a sound between Alternative Rock and Electronic Beats and never shying away from trying the untried. It’s little wonder that all of the 13 songs on SEEING RED exemplify this, since they all share the same dominant musical DNA inextricably linked to each of the two members’ backgrounds. Nils, whose resumé also includes a successful film and TV acting career (DARK, Lammbock, Ostwind), cut his musical teeth on Grunge and Soul, while Phil is rooted in Rock and Hip Hop.
With SAINT CHAOS they’ve created a place where all of their influences melt together.

SAINT CHAOS’ songs have a habit of finding the right words to shine a light in the dark, to motivate or to simply give voice to a sense of anger. Where EVERYBODY’S WEIRD mixes clean guitars and chilled beats to soundtrack a hymn for the world’s outsiders, songs like the ferocious FUCK WITH MY HEAD come across more like “Rage Against The Machine meets The Prodigy at Post Malone’s birthday party’’.
The core message in all of it remains the same: “Never give up!”. This attitude is the common thread running through the entire SAINT CHAOS body of work.

Other songs like KICK, RIPTIDE and HEATWAVE SPITTING FIRE FREAK share the same powerful language reflected in the vibrant videos already created for many of the album tracks. The boys in the red jumpsuits have also perfected the “division of labor” in the band, writing the songs together, with Phil handling music production duties while Nils puts his wealth of on-&-off-camera experience to good use producing their evocative music videos. The two-headed SAINT CHAOS machine is always running full-speed-ahead.
And fans the world over are all aboard and all-in, euphorically celebrating each new release. Phil and Nils admit they’re still warmly overwhelmed by this enthusiastic reception since, in their own words, they “just write songs and have a good time”.


With plenty to be excited about already for this debut album, Nashville’s SAM TINNESZ and VO WILLIAMS from L.A. also join SAINT CHAOS as featured guests on the title track SEEING RED, a potent, enraged knockout punch driving the album’s energy to its crowning peak.