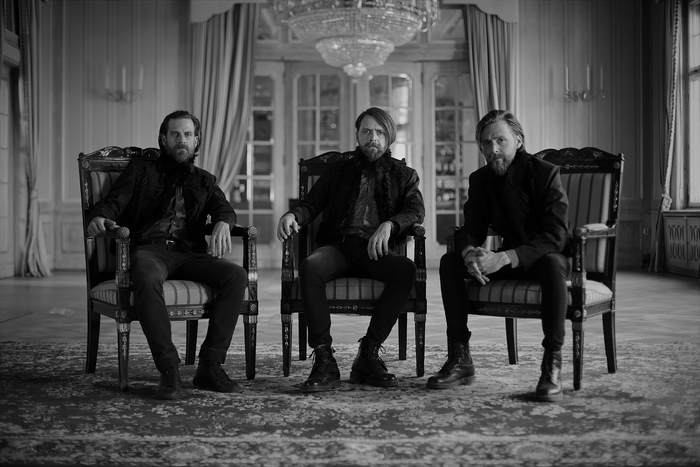 Berlin is known for many things, though save for a few names like Tangerine Dream, Rammstein and Atari Teenage Riot, rock music hasn’t necessarily always been one of them. It’s something that German trio Final Stair are planning to change, who’ve found great inspiration in the wonderfully war-torn, visually imperfect and often hedonistic surroundings they’ve grown up around. Formed by twin brothers Istvan and Denes Vörös in 2012, with current drummer André Seidel joining in 2016, this is a band who want to celebrate the intoxicating light and darkness around them through thunderous groove and soaring chorus hooks...

“Berlin is a pretty wild place, especially for clubbing and partying,” grins singer/guitarist Istvan. “Originally my brother and myself came from the outskirts. Moving to the capital was a big thing. It’s got its own scenes and a lot of them are alternative. It’s different to anywhere else in the world, I think. We love the lifestyle – it’s a little dirty and rough and around the edges. Because Berlin is not a beautiful city, to be honest, and I think that gives all of the music, from techno to rock, its own special thing.”

“The underground scenes are very dirty,” agrees bassist Denes. “Everything has an own rock and roll vibe, even if it’s not rock!”

The trio will be releasing their debut album, titled Hope, via their own Sonic Grit label later this year. The music was recorded by the members themselves in their own rehearsal facility, a place where they could dictate their own rate of progress and painstakingly boil down a broad list of influences into the core fundamentals that made them unique. With tracks like Dreamhunter (“a big fuck you to everyone who ignored us”), Never Felt Before (“an old song that

represents our grunge roots”) and Morning Dew (“one of our biggest hooks”) touching on the anthemic greatness of Queens Of The Stone Age, Biffy Clyro and The Killers in ways that feel completely fresh and new, Hope will undoubtedly be remembered as one of the finest rock debuts of its year...

“We wanted to call this first album Hope because it’s a simple word, but to us it represents everything,” explains Istvan. “We’ve been through tough times together. We pulled each other through whenever we were struggling, whether that was from mental issues and depression or other things. The hard times inspired a lot of the music and lyrics. There is that melancholic and thoughtful touch to every song. This is who we are.”

“Headgames is a song that means a lot to me,” adds Istvan. “I was having a difficult time from panic attacks. I felt like I couldn’t escape. It felt like the end of my life, but in the end I was the victor. I got over the darkness and things changed.”

The new music was recorded before the pandemic, with some of it even having been penned by the twins during their earliest years as a group, before drummer André Seidel came into the picture. The arrival of the new drummer five years ago brought even more focus to their expansive wall of noise, perhaps partly thanks to his jazz background... “We knew he had the technique,” explains Istvan. “He brought his own feel to our older songs. They sounded different, still with that rock and roll driving through the wall groove, though with perhaps more love! There are the delicate touches he adds.”

“There weren’t even any videos of me playing in this kind of style, so I was very surprised when we got started,” smiles André. “My background is jazz but taking that into big loud rock felt like an interesting twist.”

Those “interesting twists” can be found all over the debut record, from the muscular heaviness of Dreamhunter to the most contemplative rock at the heart of tracks like End Of Love and Hope. It’s the kind of music you can find yourself easily lost in, a soundtrack to escape and discover other places fueled by emotive honesty and a realness that’s becoming increasingly hard to find in the modern age...

“I think rock is missing figures like Kurt Cobain, who represented a bit of chaos and anarchy,” offers Denes. “He was literally going out there on stage saying ‘Fuck you all!’ Sometimes I feel like modern music is too clean. There’s not as much rebellion these days. We believe there is a hole to be filled by bands that think different and are different. It’s harder to find real, authentic music that’s made from the heart.”

“Growing up I loved bands like Deftones and Linkin Park,” shrugs Istvan. “They were the big players and they ruled the world. Nowadays, it’s less like that. There are a million artists out there. I might find stuff with 75 million views on YouTube by a singer nobody’s really heard of. There are a lot of bubbles, rather than big bands that everyone knows.” Final Stair are on a mission to change that – just watch this space.

“We know our music can unite the masses,” summarises the frontman. “And there’s more on the way, we’re already well into making our second record. There will be tours announced as restrictions ease. We’re ready to play and can’t wait to get out there!”