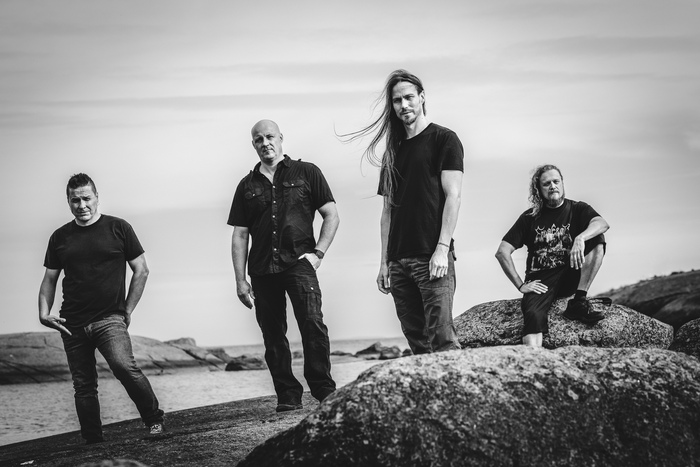 One of the biggest names in the Finnish metal scene, the masters of outlaw metal DIABLO, was born by the banks of the river Kalajoki in the west coast of Finland in the late 1990’s. Diablo’s talent was soon noticed by Poko Records, which released the band’s debut album ELEGANCE IN BLACK in 2000. Two years later Diablo were ready to hit big with their second album RENAISSANCE. The album debuted at the position #14 in the official Finnish album charts and raised Diablo to the frontline of Finnish metal bands.

Diablo did not lay back to repeat the success formula. The band continued evolving and sharpened their style for the third album ETERNIUM (2004); the sound was more carefully considered and the band gave more space to strong melodies. However, the down-tuned guitars kept crushing the listener like ever before. ETERNIUM took the position #3 on the Finnish album charts and the album stayed on the charts for ten weeks. Diablo went on tour to play intense shows all over Finland to establish their place in the hearts of Finnish metal heads.

Diablo’s fourth album called MIMIC47 (2006) crystallized what Diablo is all about; virtuous musicianship, genius guitar riffs, great melodies and the undisputed attitude of northern Finns. Impatiently awaited MIMIC47 reached the #1 position on the Finnish album charts and so did the title song single on the single charts. In 2007 Diablo toured Germany for two weeks to promote the album’s German release. One of the highlights of the tour was supporting Metallica at their Helsinki Olympic Stadium concert.

Diablo’s fifth album ICAROS was their first one for Sakara Records. The album introduced the band more aggressive than ever; the tempos had gone up and the guitar tuning down. The record buyers rewarded the band by giving Icaros the position #2 on the Finnish album charts. Icaros got great feedback also from the international media and the album was released all over Europe during Autumn 2008. At the beginning of 2009 Diablo were invited on an extensive tour with Children of Bodom and Cannibal Corpse. Diablo proved their skill as a live band, and in October 2009 they were called back to Germany to do their first headlining mini-tour.

SILVER HORIZON (2015) was the title of Diablo’s sixth album. The story of the album is loosely based on old science fiction novel called Aniara. It’s written in 1956 by Swedish Nobelist Harry Martinson. The album was loved by Diablo fans and went straight #1 on the Finnish album charts.

Diablo’s long-awaited seventh album WHEN ALL THE RIVERS ARE SILENT will be released on 25 February 2022. Diablo albums are known to be carefully handcrafted, and WATRAS makes no exception. The leading duo of the band, Rainer Nygård (voc, gtr) and Marko Utriainen (gtr), have written an intense collection of songs which radiate great care for detail. The album concept and visuals take the band back to its very roots, river Kalajoki in the Northern Ostrobothnia, Finland.

Rainer Nygård, also known as a huge fan of Kris Kristoffersson and outlaw country music in general, describes the lyrical concept of their “outlaw metal” album as follows:

”Basically the album is an honest and merciless story collection about a person who has reached the rock bottom in his spiritual life. Now it is mandatory either pick up the bits and pieces or go down under with his former way of life. Decisions are always hard to make in the eye of the storm when you’re an unstable addict and on top of everything surrounded by all kind of temptations.

There are no Hollywood endings in real life no matter what Sunrise Avenue is singing. I did this my way”