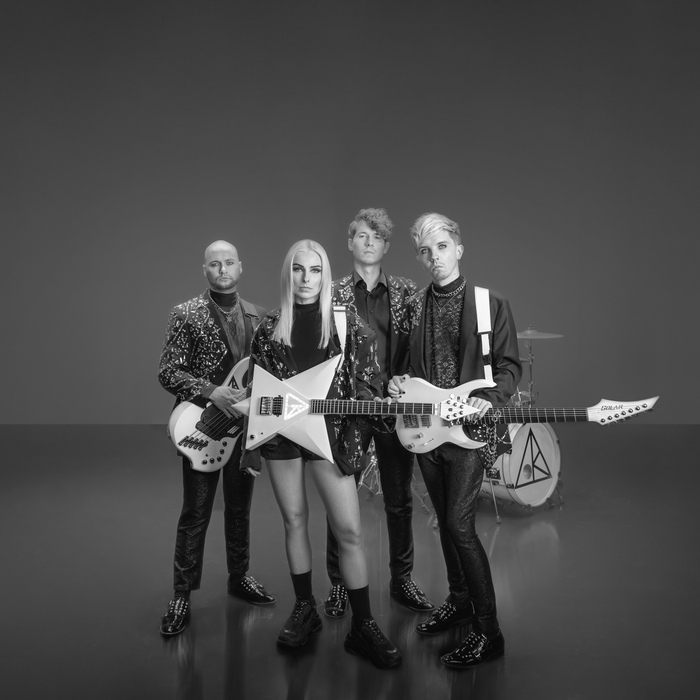 Our music is a bold combination of different elements with a unique, distinctive sound. One song may be completely electronic, while the next one is true hard rock, but, at the end of the day, our music has a distinctive Cyan Kicks sound, says Susanna Alexandra.

The band members are Susanna Alexandra, Niila Perkkiö, Leevi Erkkilä and Pietari Reijonen. Cyan Kicks was set up in 2016 and has released two albums. The band combines different genres into a distinctive style, calling the outcome modern rock.
The UMK (New Music Competiton, Finland's annual Eurovision selection contest) song Hurricane is a perfect example of this. The song is mainly electronic but introduces harder rock elements with guitar solos in the chorus.
Amaranthe’s vocalist Elize Ryd as one of the songwriters
One of the songwriters behind Hurricane is Elize Ryd, the singer of the Swedish-Danish metal band Amaranthe. She met Cyan Kicks last summer and wanted to work together with them. The band’s songwriters Susanna and Niila were immediately on the same page with Elize about the theme they wanted to work on, and the song was completed in one day.
When we got to the studio, Elize asked what we wanted to write. For a long time, we had wanted to write a song that conveys our willpower to push forward as a band and as individuals. It was the exact same theme that Elize had already been thinking about, singer Susanna says.