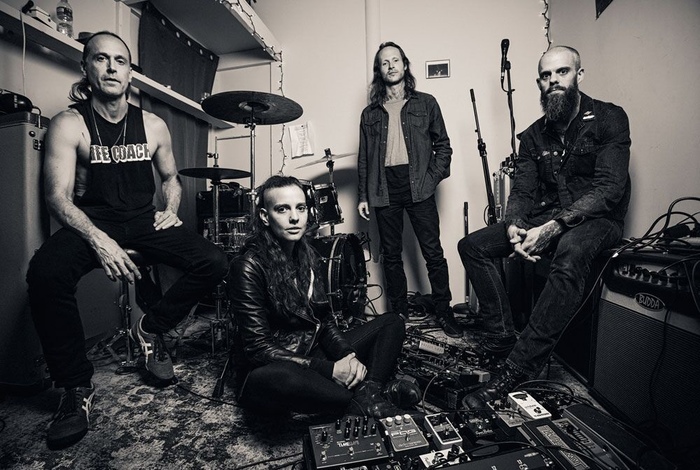 Baroness' triumphant new album contains some of the biggest, brightest and most glorious riffs and choruses the adventurous rock group has ever recorded. But its title, Purple, also reflects a dark moment in the group's recent history: the terrifying bus crash they survived while on tour in 2012.
"The band suffered a gigantic bruise," singer-guitarist John Baizley says of the accident. "It was an injury that prevented us from operating in a normal way for quite some time.
Hopefully, this record is the springboard that helps us get away from all that.

The album, which is due out December 18 and which producer Dave Fridmann (the Flaming Lips, Sleater-Kinney)
helmed, covers the gamut of emotions Baroness have experienced in recent years and serves
as their victory cry. Purple finds a revamped lineup of the band – Baizley and Pete Adams (guitar, vocals) and new additions Nick Jost (bass,
keyboards) and Sebastian Thomson (drums) – playing 10 intricately textured tunes and singing about the worry th
ey felt immediately after the crash ("If I Have to Wake Up (Would You Stop the Rain)"), the struggle to recover as smoothly as possible ("Chlorine & Wine") and their ongoing quest for survival ("The Iron Bell"). From its bulldozing opener
"Morningstar" to the avant-garde 17-second closer "Crossroads of Infinity," the record is at once both their most
emotionally threadbare and musically complex offering to date, with passages that allude to their classic-rock roots as
much as their crushing metal past.
"We didn't want to make a mellow, sad, dark thing," Adams says. "We needed to be up-tempo. We needed to be
melodic, and it also needed to be aggressive. In all of that, I thi
nk we were able to get out everything we felt, all of the
emotion involved, everything from being angry to wanting to continue to push forward."
Baroness formed in 2003, slugging it out in their local Savannah, Georgia scene while adhering to a DIY punk ethic,
booking their own tours and silk-screening their own shirts. In 2007, they put out their critically acclaimed debut, the
sludgy, guitar-banging Red Album, which heavy-metal magazine Revolver named Album of the Year. They followed it up two years later with the heavier Blue Record, extreme-metal magazine Decibel's Album of the Year. But it was on their
last release, the 2012 double-album Yellow & Green, where they really opened up, exploring a slightly lighter touch with
more accessible vocals and alt-rock arrangements, leading to a Top 30 chart debut in the U.S. and Spin declaring it the
"Metal Album of the Year." Unfortunately, the group would not be fully able to enjoy Yellow & Green's success and accolades.

In August 2012, less than a month after Yellow & Green
came out, Baroness were on tour driving in England when their
bus broke through a guardrail on a viaduct near Bath and plummeted nearly 30 feet to the ground below. Through some
miracle, none of the nine passengers died, though Baizley broke his left arm and left leg and the group's rhythm section
at the time, bassist Matt Maggioni and Allen Blickle, both suffered fractured vertebrae.
"I was lying in my bunk when the brakes went out, and I knew immediately once we picked up speed that we were going
to crash, period," recalls Adams, an Army vet who went through the equivalent of a bus crash a day while fighting in Iraq and who earned a Purple Heart in combat. "I didn't tense up. I didn't brace myself. I just rolled over in my bunk and said
a few peaceful words to myself and hung in there, because I was like, 'Here we go. If it this is it, then make it quick.' I felt
like a shoe in a dryer. Next thing you know, it's over and I'm standing there, and I was not broken. I was burned, I was
cut, I was bleeding, I was dazed, but I was OK. And I collected myself and started helping people out. But I absolutely
thought the band would be over."
Baizley spent two-and-a-half weeks immobile in a hospital and then months to recover from his injuries, but when he
did, he and Adams decided to keep the group going. "I spoke to James Hetfield, who has also dealt with the fallout from
a bus-related accident, and he said, “Life is going to be difficult for a while; but you'll be fine. You've got this,'" he says.
"And once I had done some physical therapy and played guitar again, I thought, 'Yes, I've got this. It’s not over.'"

Looking back on it now, Hetfield was right, and now Baroness' members feel like they've gotten through the worst of it.
"While we realize the accident is obviously of interest, we have gone over that particular story's details at length over the past few years," Baizley says. "We feel that this album not only addresses but puts a punctuation mark on that story.
Baroness existed before the accident and will continue to exist, and we'd rather talk about what we've created with Purple
than let one side-story overtake or define who we are as a band."

Once Baizley was ready to get moving again, the first matter at hand was to find a rhythm section, since Maggioni and
Blickle had both split amicably with the group. To find the right
people, Baizley leaned on some famous friends for
advice. Eventually, Baizley spoke to Mastodon's Brann Dail
or, who pointed him in the right direction to finding the
group's new drummer, Trans Am member Sebastian Thomson, to help build up the band again. "We didn't try out
anyone else," Baizley says. Another friend suggested that they check out someone whom she described as being the
best player she’d ever heard. That turned out to be Nick Jost, who not only played both the upright bass and bass guitar,
but was also a skilled piano player with a degree in jazz composition.

With a new lineup in place, the group eventually embarked on lengthy trek that Baizley describes as a "thank you tour,"
to the fans who stood by the band in its darkest hour, in the spring of 2013. Other than a handful of Australian gigs in
2014, Baroness spent the time since then getting ready for their next chapter, setting up their own indie label, Abraxan
Hymns, and writing songs for Purple.

"I wanted to celebrate my misery through my creativity and face it head on," Baizley says of the LP. "The lyrics on
Purple are about the different paths that formed in the fallout of the crash, from very direct stories about difficult moments of
suffering to the love I feel for people who were there for me."

When the group finally got to work out the tunes in the studio,they did so with a producer whom Baizley has always
been eager to work with: Dave Fridmann. "He's been on the top of my list since Day One," the singer says. "I never
thought he'd work with us. I absolutely worship his recordings."
With 25 years of experience mapping out Wayne
Coyne's intricate flights of audial fancy on Flaming Lips records and making the most of bands generally known for
understatement like Low and Spoon, the producer helped the group construct a sonic habitat for all of Purple's unique
sounds, including acoustic guitar, otherworldly keyboard and echoes galore. He also helped them make the most of
themselves.
"We're a very analytical band," Adams says. "We'll write something and overanalyze it to the point where we feel we've
edited the songs as much as they could be, and Fridmann threw ideas at us that we'd never thought about before. We
needed that outside ear."
But Purple is perhaps most notable for serving as a vehicle for Baizley and Adams to move on, and welcome Jost and
Thomson to the fold. "They are both very talented musicians," Adams says.
"They're open to new ideas and you can rely
on them."
"They said, 'We just want to make sure it kicks ass,'" Baizley recalls. "That's what I needed. I was in a pretty bleak spot
when we weren't playing. And when I realized that Pete, Nick and Sebastian were excited – and I hadn't felt that unified
amount of excitement before – it pushed us into saying, 'We've got this.'"

"The whole process was very smooth," Thomson says. "The only thing that required a little bit of work was learning how
to write together. That took us a month or two to figure out, but
once we did we got on a roll."

"I made a mistake and hit the wrong chord at the end of a run through of 'If I Have to Wake Up' and out of that mistake
we wrote 'Fugue,'" Jost says.
“
That shows how we grew. And then 'If I Have to Wake Up' shows just how far we came."
"We had a situation where a band had to rebuild itself with half-new members and an almost entirely new crew,"
Thomson says. "On paper that sounds like a possible recipe for disaster, but we all clicked almost immediately. We still
have that attitude to this day."
Adams says only recently, since the group has gotten back on the road, hethinks that Baroness has felt like a band again.
And now with Purple under their belts, Baroness are ready to take on the world. "There's a lot more playfulness now,"
Adams says. "Everyone now is positive, there's no heavy bullshit. People are laughing and smiling more now in Baroness than I've ever seen. That's real, and I'm thankful for that." The bruise is
beginning to heal.